Climate change and mental health. Arguably two of the most major problems faced by Generation Z and even Millennials. Surprisingly, there’s a connection between them both. Climate change and related disasters cause anxiety-related responses also as chronic and severe psychological state disorders. Flooding and prolonged droughts have been associated with elevated levels of anxiety, depression and post-traumatic stress disorders. The trauma and losses from a disaster, like losing a home or job and being disconnected from neighborhood and community, can contribute to depression and anxiety Exposure to extreme heat may cause increased use of alcohol to deal with stress, increases in hospital and ER admissions for people with psychological state or psychiatric conditions, and an increase in suicide. The need for mental health services increases but there is often a disruption in services or a decrease in the availability or accessibility of service.

Some people are more susceptible to the potential impacts of global climate change, including children, the elderly, the chronically ill, people with cognitive or mobility impairments, pregnant and postpartum women, and people with mental illness. People of lower socioeconomic status, migrants, refugees and therefore the homeless can also be more vulnerable.

People with psychological state conditions are more likely to be suffering from extreme weather events for several reasons:
• Psychiatric medications can interfere with a person’s ability to regulate heat and their awareness that their body temperature is rising, which is associated with injury and death.
• They are also more likely to live in poverty or to have co-occurring substance use disorders, which make it harder for them to cope or adapt to changes.
• Those with severe mental illness are more likely to be dependent upon service, infrastructure, and medication supply chains that are often disrupted after disasters.

There are many potential long-term impacts of global climate change , like population migration, food scarcity, loss of employment and loss of social support, have consequences for psychological state .
Mental health also can be suffering from other impacts of global climate change , including food scarcity or food quality issues, potential increases in diseases transmitted by insects (such as Lyme disease and malaria) and air pollution.

(See image on next page) 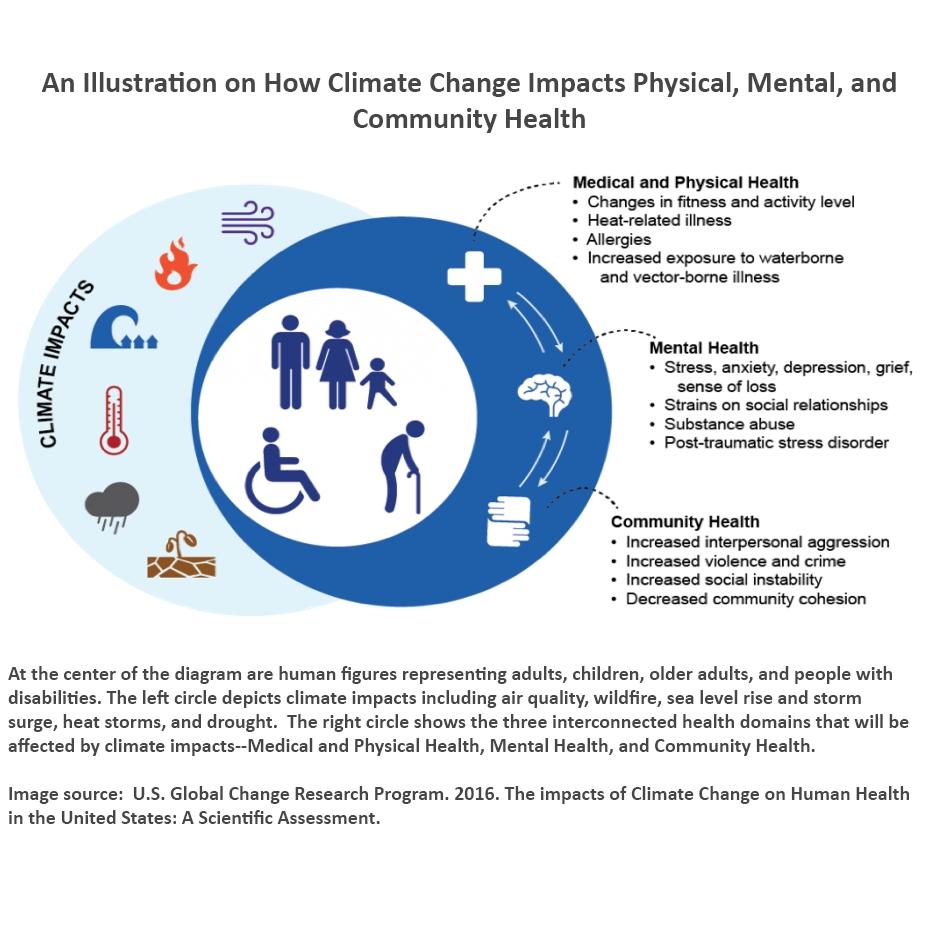